Perhaps this will be read as me throwing up my hands in defeat, finally being stumped beyond a reply. Regardless, allow me to posit my closing statement, so to speak.

I attempt to hold a very fluid, live and let live sort of attitude. If you believe something, whole-heartedly and you enjoy believing that, I have absolutely no argument against that. In fact, so long as you aren't harming others, there are very few arguments against this sort of personal ideology. This set of beliefs can be very very different from the status quo or be nearly identical to it, that does not matter and I have no place dictating it.

The only place I raise issue is if you believe the way you think is just fundamentally the way that everyone should think. This debate kind of highlights the result of that, sort of a banter of, "Our answers are theorised in science, why do you think anything is certain?" and "Our answers reside in the bible, how can you not see this as certain?" It is impossible to debate because both sides have accepted their methods through which they think and any outside logic needs to make sense in their own rigid frame of thinking and that just fails miserably.

So, perhaps this is how I conclude, I am not sure. Anyway, if you personally know how you see the world, that is your own decision. Ideologies can be informative, beautiful, eye-opening or maybe just interesting, regardless of ones personal beliefs, so please respect all angles.

...and any other contributors...

In the end, religion is inevitable. As history is doomed to repeat itself (and so on and so forth...), and given the human nature to find inspiration in nearly anything (sentimentality, tradition, superstitions), religion with forever and always occur in any society, no matter how developed and no matter how large. Religion has existed for millennium - since the very beginning of the evolution of humans - and has itself evolved into the primary religions you see today (Christianity, Islam, Hinduism, etc.), most of which are new in perspective of religion's beginnings. Either way, where knowledge fails, belief supplements, and thus we humans secure our states of mind. If we were to truly look for the answers to everything, constantly, without relent - we would simply go insane.

I, personally, am not religious. A part of me believes religion is toxic...however, without it, there would be a great deficit in society. It has been caustic and catalytic - it has killed many and saved many more by driving explorers and those seeking scientific knowledge. Some religious people believe in evolution and the Big Bang, and that is fantastic; despite their beliefs, they search for more answers. Some religious people keep their affiliation entirely to themselves and avoid any conflict or discussion over it, and that is wonderful; despite how fervent they may be in believing in their religion, they understand how some - many, mind you - feel about it, and are content in keeping it to themselves.

On the debate: pointless. Useless. Counterproductive. Disappointing. I wish Bill Nye knew better, and (given that I have also seen his other literature and online ramblings) I believe that Ken Ham should not be looked to as an influential figure to any degree, especially in this debate. Hopefully (and evidently) this was a victory for nobody; it served merely to stir the pot.

tl;dr religion and science exist and nobody has the answers we are looking for. Peeps need to get over it but I liked the discussion here.
Top

WHY WOULD YOU BUMP THIS

Miniike wrote: WHY WOULD YOU BUMP THIS

Phantomboy wrote:It's not going to curve world hunger, improve our technology, limit costs, protect civil rights - especially since not much is really done with the information taken away - because everyone who enter already is set in what they believe, so why debate it?

There are many scientific theories (such as the theory of evolution) that support a popular mental clusterfuck argument: the Bible consists of many intellectual discrepancies, but is said to be the Word of God itself. The Bible also proclaims that the Word of God is true. But, how can it be true, if it is false? Did the god of the Bible wake up one day and decide, hey, I want to change the value of Pi? It also doesn't help that there are many versions of the Bible. Which one is true? How do you know for sure that Mormons are "more right" than Catholics? What about the Lutherans? Protestants? Eastern Orthodox? One argument that is (ironically) used to support both sides is the Fermi Paradox, which asks, "where are they?" (extraterrestrials). You can read up about it here. The usual religious argument is that a lack of extraterrestrials, or extraterrestrial encounters, is at the will of their creator (God). However, this contradicts beliefs in the Bible that the earth, humans, and the angels are the only thing he intelligently created. That means, according to the good ol' Lord's book, anything short from Deoxys to Martian Manhunter is inferior to a **** sapien or an angel. Let that sink in.

Bonus: faith healing and the cult membership of flat-earthers and more
Don't you just hate when someone cuts you off in the middle of a sente
Top

[quote="matthewbny"][/quote]
Perhaps I was cutting short the notion of questions which the debate raises; that is very true. However, whilst a debate as you described gets into many questions of translations, specifics of genealogical descendants and the comparison of differing religions -- that wasn't really what occurred in the Nye-Ham debate. You know?

I have since altered my opinion. I don't think that there isn't a debate to be had - but rather there are elegant and less-so manners in which it can be carried out. I was, unsatisfied, with the fundamental clashing of ideals across the vast majority of the debate.

One thing that just truly bothers me is that the Old Testament is often neglected, while the New Testament is observed...how can one consider themselves Christian if they ignore half of God's word?
Top

LoneRanger wrote:One thing that just truly bothers me is that the Old Testament is often neglected, while the New Testament is observed...how can one consider themselves Christian if they ignore half of God's word?

Apparently since Jesus died for our sins the old testament is waived.
Top 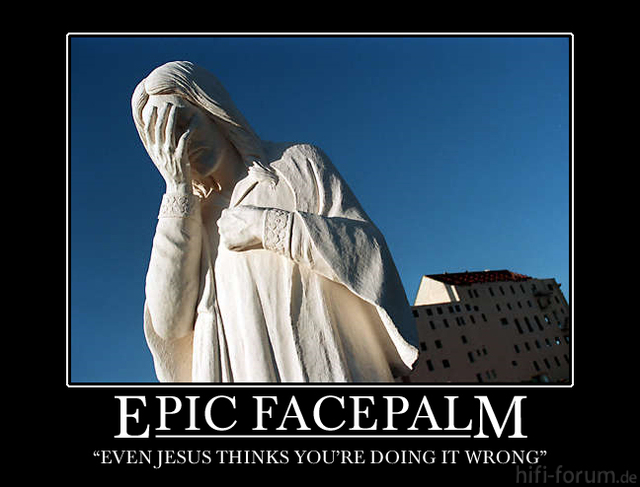 Ah, phrasing it quite like these past few posts doesn't really sit well with me. Despite being very much a more pro-science type of person and having not been religious for several years. It deeply saddens me to see a persons religion, as personal and as historically significant for so many as it is, dealt with in such a light. I would posit, is a generally disrespectful manner.

I am not perfect, but I've done my best to word each of post I bring to this debate in a way which does not directly attack the persons nor summarise to the point of nullification those religions. I understand not everyone deserves such reverence for holding something personal, but I cannot bring myself to trampling all over a culturally significant entity in such a informal manner. Plus that, I feel we've gotten a bit off-topic of the specific Ken Ham vs. Bill Nye debate.

LoneRanger wrote:One thing that just truly bothers me is that the Old Testament is often neglected, while the New Testament is observed...how can one consider themselves Christian if they ignore half of God's word?

If someone ignores God's word then, yeah, you can't really consider yourself a Christian.

Return to “Off Topic”