Cool things made of cheese graters. Not even kidding.

Have you ever vandalized a Wikipedia article? If so, which one, and what did you do to it?
I need a shot again, that sweet adrenaline.
Top

I made Canada home of the worlds largest African Dogshark. I also put a giant image of the German flag on it. Confuse the crap out of people.

I lied about having a Facebook years and years ago. That was pretty dumb!

Mirror mirror on the wall, who is the dankest of them all?
Spoiler
Freekboy31
Top

Whilst having heard that term tossed around on the internet, I was unfamiliar with the specifics of its meaning. So, I looked it up and found it was to mean, "disagreeably damp, musty, and typically cold".

With that in mind, I think the obvious answer is those oceans that exist under the earth's upper mantles. Like, I think they kind of defy expectation in that field.

Do you have any morning rituals or routines that you feel you must do every morning or your day doesn't go well?

Go back to bed.

Good/bad points of where you live?

Hmm, like the town, or country? Both are kinda different answers-- Well, I really genuinely like the dense forests that are all around me, plus the easy access to a large metropolis in like fifteen minutes of driving. Unfortunately that mean while there are lovely parks near by there is not many shops, stores and such nearby!

Country wise, uh-- I think I am lucky to live somewhere that forces me to speak such a prevalent language in the world, for better or for worse. Although, I am really kind of embarrassed and saddened by the general impression that the United States kind of gives itself worldwide.. Being tied to really terrible stereotypes is kinda awful.

If you could receive anything in the mail tomorrow, what would it be?

Barring that though, I wouldn't mind a mini-fridge.

You are currently walking away from an explosion. What's your epic one-liner?
I need a shot again, that sweet adrenaline.
Top

What is your ideal death?

Can I be super obvious and just say in my sleep? Actually to be a little bit more interesting, I wouldn't mind being in the situation where I choose to disconnect myself from a machine which is keeping me alive, and then just go running off through a field to lay down and go to sleep when I am tired.

That, I feel would be a really good way to go.

If you could visit anywhere on earth, where would you choose and why?

I would probably plop myself down into the rolling hills of New Zealand because Lord of the Rings. I mean really. The place is absolutely stunning while also being secluded enough that I could get some relaxing time for myself to meditate and think.

If you were thrown into the world of any video game ever, what game would it be? Why?
Top

Probably a language term I've learnt somewhere, like fricative, plosive, or aspirated or somewhere along those lines. Not overly exciting, so alternatively the longest name I know is a town which is named Llanfairpwllgwyngyllgogerychwyrndrobwlll.

What is your favourite season of the year?

Winter, because it's as far away from summer in Arizona as possible.

Hmm.. I've had eel in unagi, which isn't incredibly common. I have had Native American food from family events since I was young so while it was never really "a thing" for me, maybe other people would find things like the fry bread and ojibwe interesting-- which is just sort of like a bit of deep fried dough and a jam of berries as a dip. Pictured here!!

How do you feel your desk (and/or wherever your computer currently is) reflects your personality as a person? Do the trinkets or object near or on the surface say anything about the person you are?
((Warning a bit deep))

Well, I have a lot of CDs and a computer on my desk, which indicate things I'm into. I'm also not ashamed of the fact that I have 3 Nickelback albums, because I don't care what other people think. I also have a box on it that I keep my keys and various and assorted IDs in, for organizational purposes.

What is your favorite album?
I need a shot again, that sweet adrenaline.
Top

Gosh. I don't know if I have a favorite album, I mostly just like individual songs...

I guess if I had to choose it would be Ultraviolet. Owl City tried something new with Midsummer station and it was good but not quite my thing. The songs aren't amazing on Ultraviolet, but I really love the album as a whole. He seems to have moved on to different styles in his latest album though...

(Apologies if I re-ask a recently asked question, I haven't been keeping up with this thread.) What was the last media (book/movie/video game) you read/watched/played that really touched you? I don't mean it changed your life or anything but you were just like... wow, this is such amazing art.

Ow, I know! It is somewhere between two poems I recently watched read aloud on a YouTube channel called ButtonPoetry. They are "A Boy Called Everything" and "Siri: A Coping Mechanism" and they are incredibly touching and amazing in several different ways.

When did you last cry, and what made you do so? 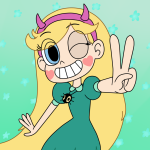 If you just simply mean fluid running down your face, for any reason that isn't from emotions, just a few minutes ago.
If you mean emotionally, I don't even remember.

Let's say you have a hacking OS. What would be the first hacky thing you'd do?
i'm from another dimension!
Top